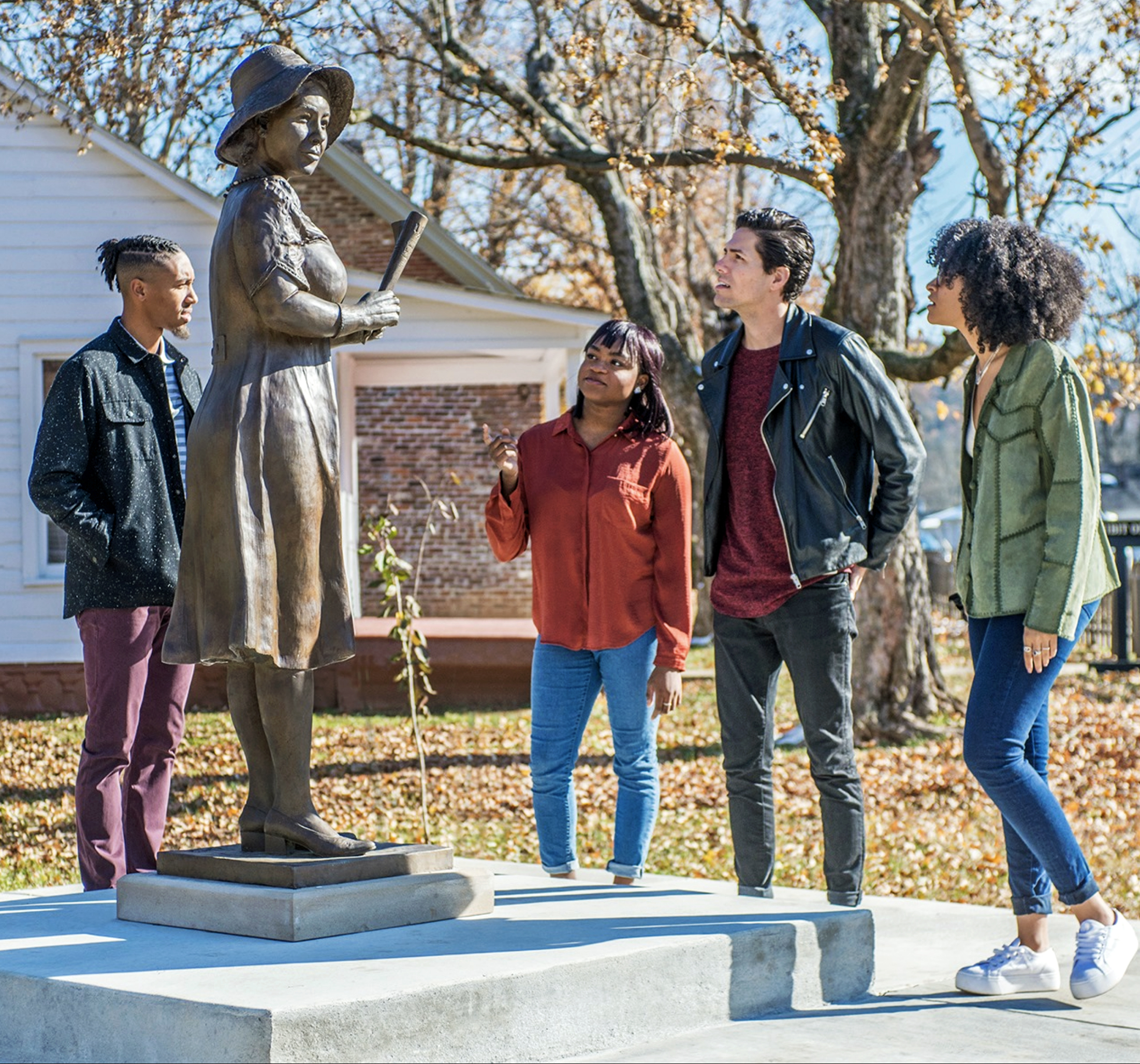 Location:  SEEK Museum  183 W. 8th St. Russellville, Kentucky 42276
"A Member of the US Civil Rights Trail"
Alice Dunnigan was the first African American female journalist to earn White House, State Department, and US Supreme Court Press Credentials in the US.   Alice worked under four presidents-- Truman, Eisenhower, Kennedy, and Johnson.  In her life time she received over 50 awards; not only groups in America, but organizations and governments all over the world praised her for fighting injustices.  She was a Mother of the Civil Rights Movement in America in the 1940's.  Please view the short films below of her Second Whistle Stop Tour before she was permanently installed at the SEEK Museum in Russellville, Kentucky:


The making and unveiling of the sculpture honoring Alice Dunnigan was covered by over 300 media outlets worldwide, including:

The Hill Reporter – First Black Female Journalist to Cover White House will be Honored with Statue in D.C.

Poynter. – ‘The Mother of a Movement’: First black woman White House correspondent is finally getting recogniton 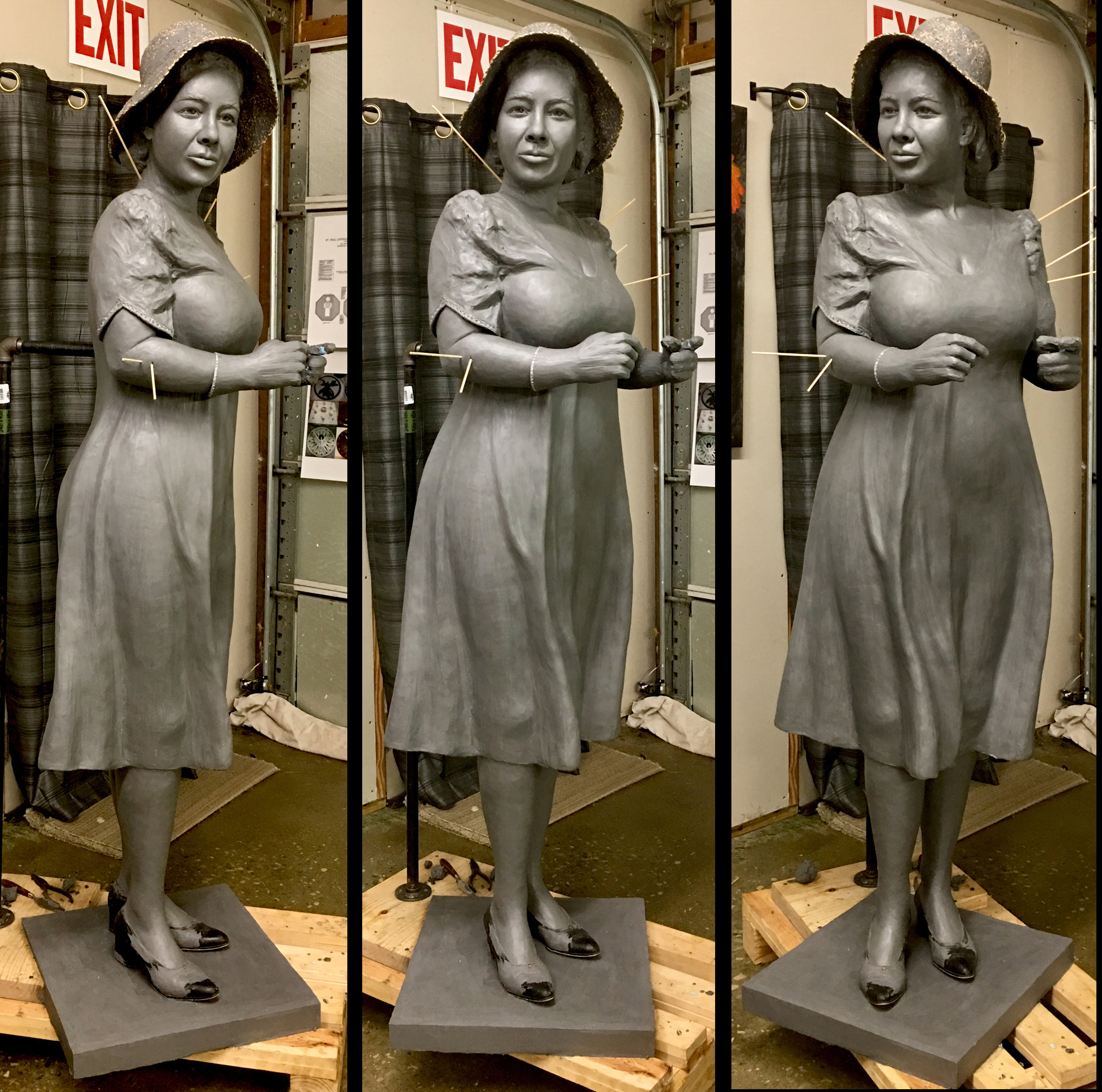 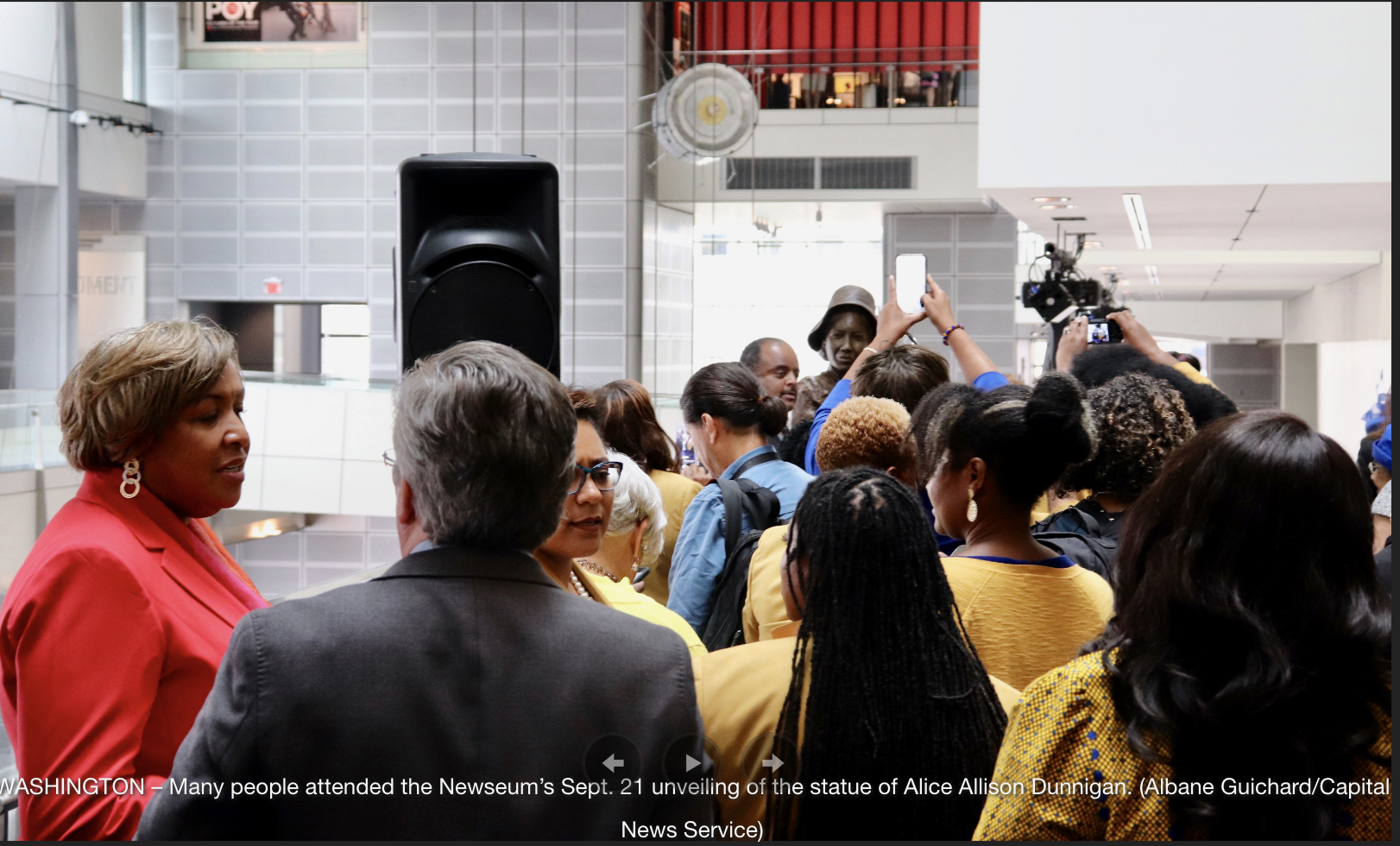 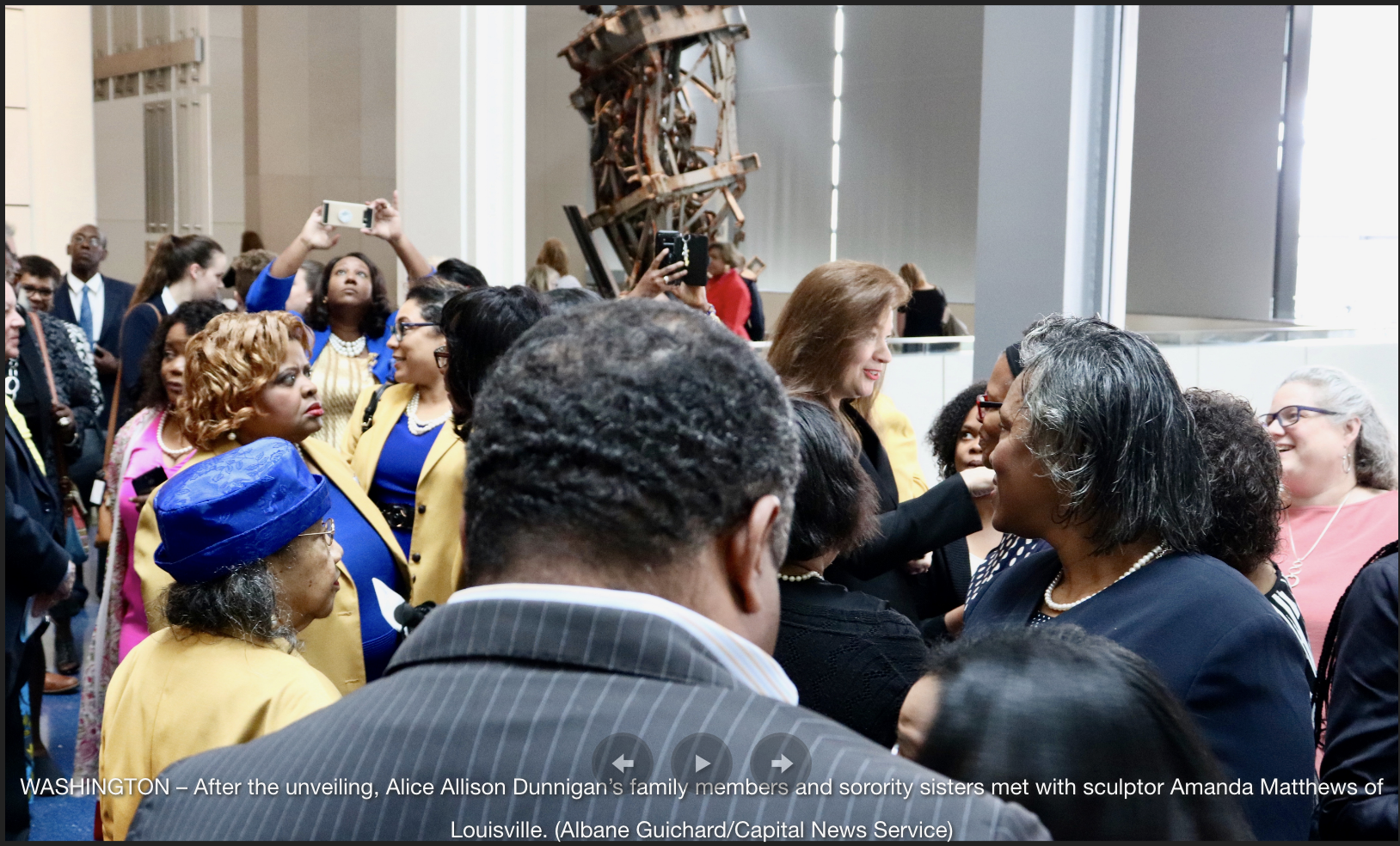 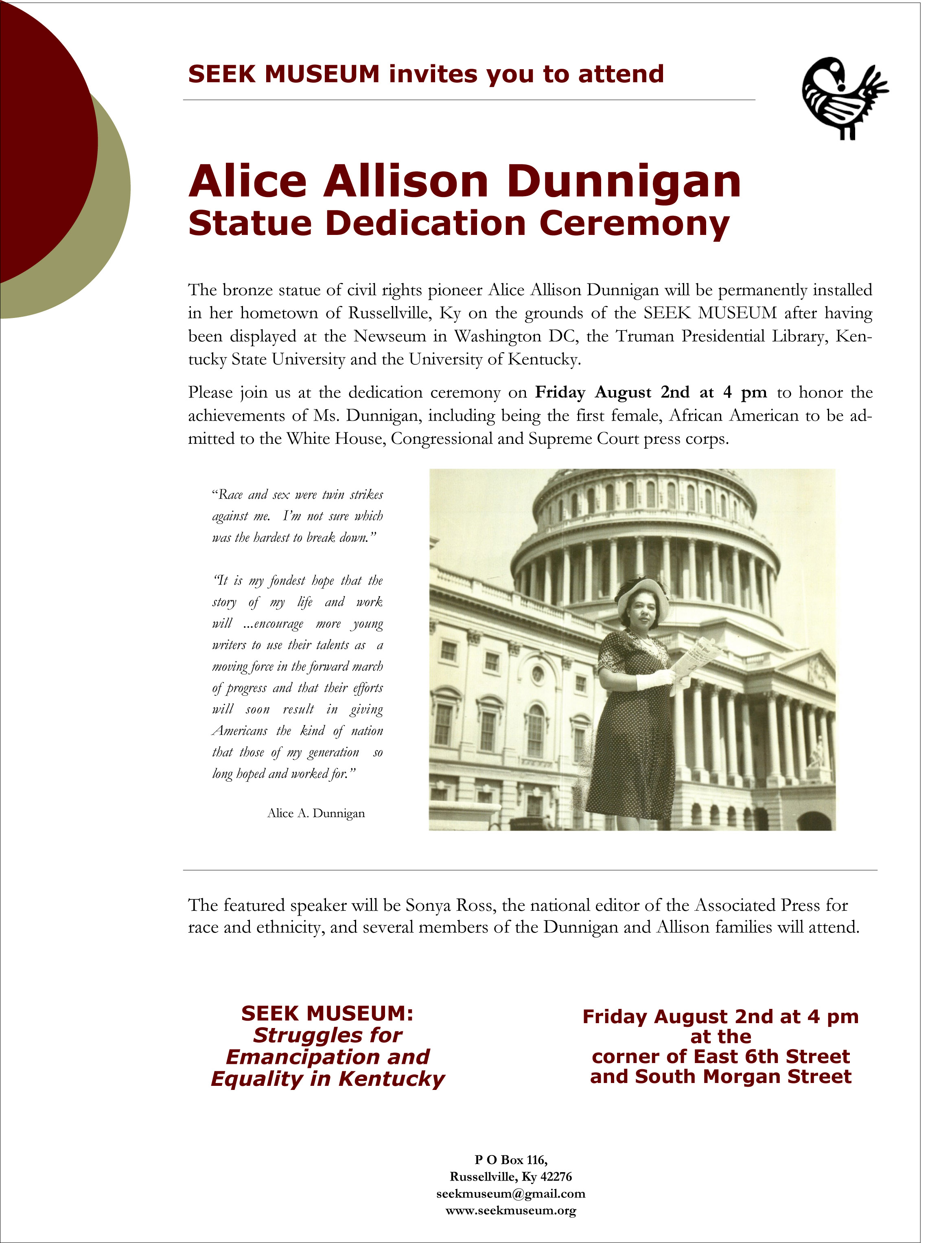 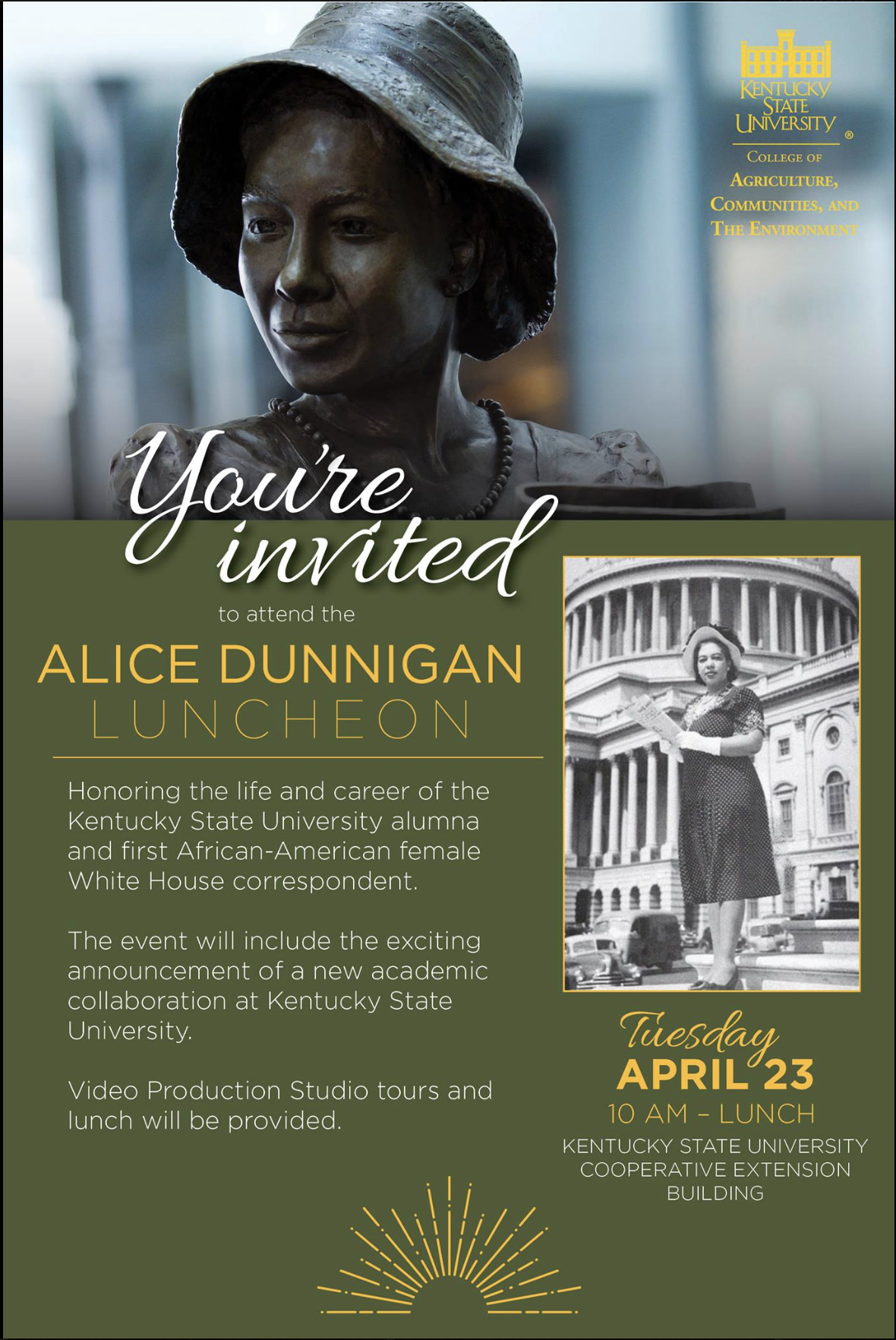 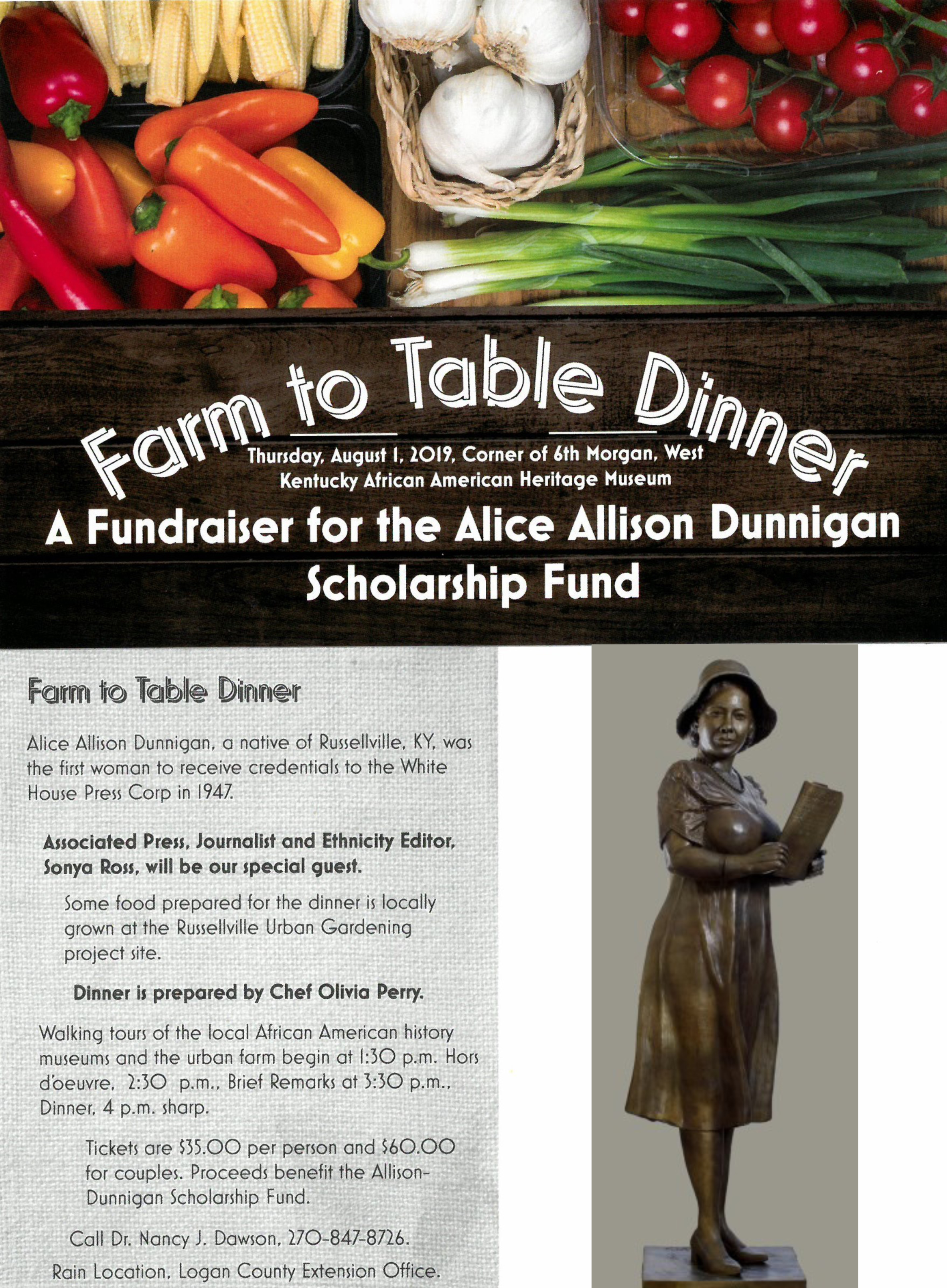 As a child in Russellville, Kentucky, I first heard of Alice Allison Dunnigan when my grandmother would say, “Alice is coming to town.” Young as I was, I had no idea who she was talking about. Years later I found out “Alice” was Mrs. Dunnigan and that she and my grandmother had become friends while cleaning cemeteries for the WPA in the 1930s.

Alice Allison Dunnigan was born in Russellville, Kentucky in 1906, the daughter of a tenant farmer and a laundress. When she was 13 years old, she began her writing career with a weekly column about Russellville happenings for the Owensboro Enterprise.  She graduated from the segregated two-year Knob City High School in Russellville in 1923 and, with the support of her family and community, attended what is now known as Kentucky State University in Frankfort, where she completed a teachers’ course and began an 18-year teaching career in Logan and Todd counties. Mrs. Dunnigan later received degrees from the Normal and Industrial Institute, West Kentucky College, Louisville Municipal College, Tennessee A & I, and Howard University, as well as an honorary doctorate from Colorado State College.

While working at the Louisville Defender, she published The Achievements of Negros in Kentucky.

When I was about 18, one of her great nephews who knew of my interest in African American history gave me her book, From the School House to the White House. This started a 30-year quest to let people in her hometown know who Alice Dunnigan was.

During World War II she moved to Washington, D. C. to work at the War Labor Board. After the war ended, Dunnigan went to work for the Associated Negro Press and became head of that organization’s Washington Bureau on Jan. 1, 1947, a job she held for 14 years supplying stories to 112 African American newspapers across the United States. In August 1947, she became the first African American woman accredited to report on the White House, covering presidential press conferences. She also became the first African American women to gain press credentials to report on the State Department and the Supreme Court.

"Race and sex were twin strikes against me.  I'm not sure which was the hardest to break down."  Alice Dunnigan

In her book, A Black Woman’s Experience from the School House to the White House, she stated that she had three strikes against her: 1) She was black; 2) She was a woman; and 3) She was from Kentucky.  She continued that she thought her sex was the most difficult of these barriers, because she not only had to convince white Americans of her capabilities, but she also had to fight against discrimination from Negro men. Alice did not let this road block stop or even slow her work for change.

Alice had to sit with the servants to cover Senator Taft's funeral in 1930, but made history in 1948 as she went on the whistle-stop tour with President Truman.

In 1948 Dunnigan again made history by being the first African American woman on a presidential tour when she went on the whistle-stop tour with President Truman. Being the first African American women brought many hardships to her. No African American organization would give her financial support to make this landmark trip. When she asked her boss, Claude Barnett, chief of the Associated Negro Press, for the money, he told her women don’t go on trips like that. She borrowed $500 from a bank and used $300 of her own money to make the trip, thus adding another first to her list of accomplishments.

Dunnigan experienced a lot of racism while she covered presidents and national politics. She sat through Congressional hearings where blacks were referred to as "niggers," was barred from covering a speech by President Eisenhower in a certain theater, and had to sit with the servants to cover Senator Taft's funeral.

She was such a hard-hitting reporter that Eisenhower refused to call on her to ask questions during press conferences, because he was afraid to be embarrassed by her difficult questions, which often involved racial issues. The White House asked her to submit her questions to them in advance, but Dunnigan refused, since no other reporter had to do that. When President Kennedy took office, he ended the practice of ignoring Dunnigan and honestly answered her questions about discrimination and segregation. In addition to writing about politics, she also wrote speeches and reported for the Youth Council of President Johnson, with whom she had a special connection because of his Logan County ancestors.

Dunnigan was a leader all her life, a role model for all women, and a door opener for all people-- Black and White, male and female. Her achievements covered the state, national and local levels. In Journalism, Politics, Civil Rights, Community Service, and Government, her service is hard to match. She worked under four presidents-- Truman, Eisenhower, Kennedy, and Johnson-- and challenged each of them when she thought something was wrong. As an example, President Truman had given the order to desegregate the Armed Forces, but not the Army Schools. Alice asked, “Why?” and Truman wrote an Executive Order desegretating these schools.

In her life time she received over 50 awards; not only groups in America, but organizations and governments all over the world praised her for fighting injustices.

Her life encourages women and young people to believe in their aspirations. You cannot read her book, From the School House to the White House, without gaining a great respect for this woman.

In 1982 she was inducted into the Kentucky Journalism Hall of Fame. She is also honored with a historic marker in the Town Square of her hometown, Russellville. She died in 1983 in Washington, D. C.

I would like to conclude with this observation: I have been privileged to visit the Moorland-Spingarn Research Center Library in Washington, D.C., to find material in Dunnigan’s collection there for an exhibit honoring her in her hometown. For two days we went through boxes of materials about the life of this great woman. Every night we went back to our room, amazed as we reviewed her accomplishments. On the third day we went to Temple Hill, Md., to interview her son Robert. After asking him a number of questions, I asked how he would best describe his mother. Robert said, “Persistent. Not pushy or overbearing, but if she asked for something on Monday and did not get it, she would be back the next day and the next until she got what she wanted.”